If you're not familiar with the animations of Jan Švankmajer, you're in for quite a trip. The Czech artist and filmmaker is known for his metaphorical, captivatingly surreal stop-motion and claymation films, and is God to many (including talents such as Tim Burton, Terry Gilliam and the Brothers Quay). 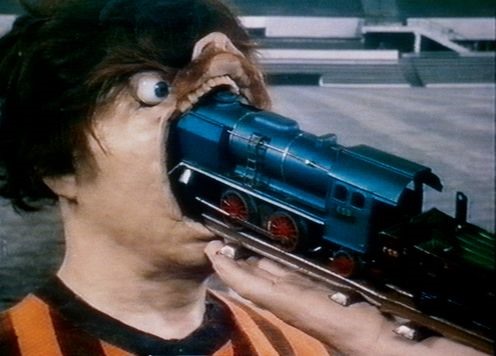 In the early onset of Švankmajer's career, his wildly bizarre and politically laden works were banned by the Czech communist government of the 70s, preventing his work from spreading to the West until the early 80s. Today Švankmajer is acclaimed by both the filmmaking world and the art world, and at age 76, the icon is currently working on his last project, Surviving Life.

Below, a selection of excerpts from Švankmajer's films.

The short below refers to the title of this post. Perhaps one of Švankmajer's most celebrated pieces, Dimensions of Dialogue was selected by famed director Terry Gilliam as one of the ten best animated films of all time. The video below shows the second half of the film (click on the second video in the gallery to view the first half).

The beginning claymation portion is truly fantastic, but be sure to hang in there until it the 3:00 mark (it gets less steamy, and more slapstick).

The poor character in Virile Games eats trains, get his head smashed in, is cut up with scissors and grinded into spaghetti.

A short (but sweet) love story between two bloody, raw slabs of meat.

A human body made of clay struggles to reconstruct itself in a cramped space.

Truly disturbing, Flora features an Archimboldo-esque figure tied to a bed, struggling, as it painfully decomposes. A single glass of water sits on the nightstand, out of reach.

Common household objects have a sunny picnic in the grass.